LEWISBURG - The first steps in a process that will ultimately lead to the construction of a 107-room hotel on a parcel of land directly behind the Miller Center were proposed and approved by East Buffalo Township supervisors at Monday evening’s meeting.

Making a presentation to the board was Buddy A. Schenck, vice president, Mid-Penn Engineering Corporation, of Lewisburg. “Essentially,” he said, “we have a lot that we are looking to consolidate a lot behind the Miller Center with surrounding property, then create a subdivision, a threeacre parcel to situate a new hotel. The remaining lot will be just under seven acres.”

The hotel will have 107 rooms with the primary access off Hardwood Drive. The site work is estimated at $1.6 million, Schenck said.

Schenck said the infrastructure is already in place to receive the stormwater runoff from the property.

“We have presented everything to the [EBT] Planning Commission,” he said. The two outstanding issues that 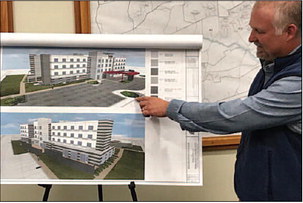 HOTEL, from Page B1

were needed for his organization to proceed, and which required supervisors to approve, were a letter of credit and an NPDES permit. NPDES stands for National Pollutant Discharge Elimination System.

Any development in Pennsylvania that impacts an area of one acre or more must meet state stormwater requirements and be covered under an NPDES Permit.

Supervisors Char Gray, Matt Schumacher, and Jim Murphy approved the plan, contingent on attaining the letter of credit and receiving the NPDES permit.

Later in the meeting, the board unanimously approved the Buffalo Valley Regional Police Department budget of $2.7 million, with EBT’s share of $1.8 million.

The supervisors discussed the BVRA board, which will have an open seat beginning with the November meeting. It was decided that anyone interested in that position would have until Oct. 25 to submit an application — apps are available online on the Township’s website. A decision about who will fill the seat will be made at the Oct. 28 work session, Gray said.

In other announcements, the first reading of the 2020 Township budget will be at the Nov. 12 meeting. A preliminary budget will be discussed at the Oct. 28 work session.

Monday began brush pickup in the township. There will be one run-through, noted Schumacher. Once that is done, crews will begin leaf pick up until about Dec. 3, weather (snow) permitting.

Click here to see this page in the eEdition: